When working with numerous automation systems in installations, I always faced difficulties with integration of devices that support different protocols. Even if there is a hardware interface, it often supports minimal number of functions.

With time the problem grew more and more acute. A customer goes to a system integrator to join a variety of equipment in a single system. Even if the customer is ready to buy only recommended equipment (that happens seldom), it is not possible to stay within the limits of 1-2 protocols. A boiler can be controlled via KNX, ventilation and a diesel generator – via ModBus, lighting – via C-Bus (the customer likes their switches), weather station – via RS232, UPS – via SNMP, electricity meter via M-Bus, conditioners via DIIINet, in addition ther is audio multiroom by Russound, audio multiroom by Kramer and so on. Here is a typical picture that I made for the customer to explain how everything worked. 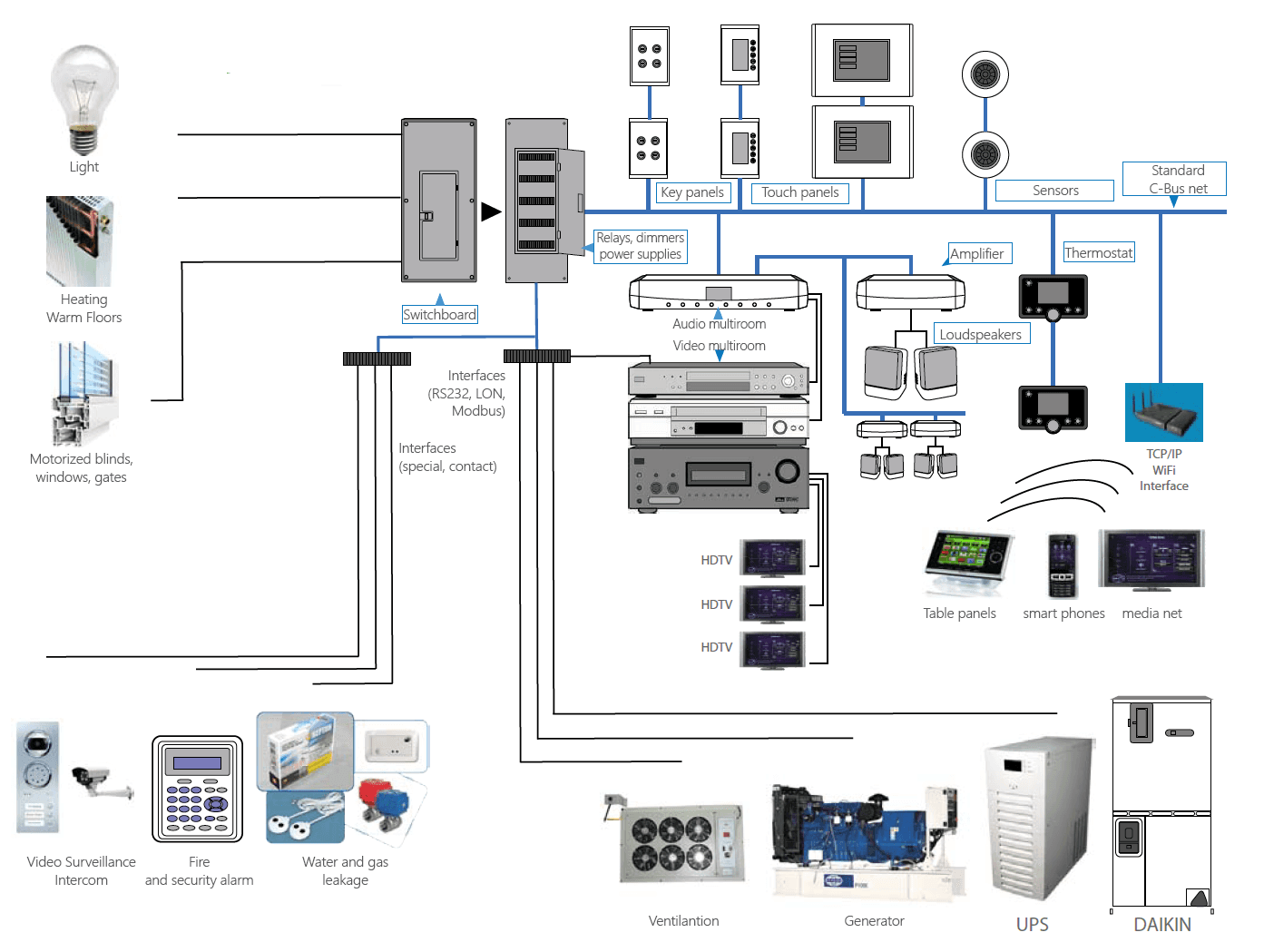 The typical approach of an integrator is to persuade a customer to use one protocol, for example, KNX or C-Bus, to use something multi-protocol like Beckhoff/WAGO as the basis for engineering systems and monitoring, and to connect all of it together with A/V equipment to Crestron/AMX and to set automation there. As a result we get a typical luxury house with a serious budget and only one company that knows how the whole system works.

And here all of a sudden “IoT” epoch begins, when about 20 new interesting gadgets have to be connected to the system. But it is impossible, because each of them works via its own protocol and the budget will exceed all possible frames. But the “epoch” is only beginning, and the chaos is getting stronger, despite the numerous standardization attempts.

The only major standardization, that we have seen on the automation market recently is that every system or device has IP output. It presented a chance to realize a life-time dream.

Personally I have always dreamed about a tool that:
1. gives a capability to simply join commands of different protocols without programming
2. can be installed on hardware of my choice, for example on a server or a controller, that is already installed on the object.

And this is exactly what we did in iRidium pro.
1.First we join blocks:

2. Then we upload the result onto iRidium Server, that is installed on Windows (tested at Intel NUC, Compute Stick and others) or Linux (there are also versions for Raspberry Pi, etc.). There are several ready hardware versions. In fact, it works even if you simply send the client app – i3 pro to a smart phone based on iOS or Android (via iRidium Transfer or the project section in My account of the web-site). But it is interesting only for testing purposes.
Here is a short video where I use4 protocols in one project and simply connect certain commands with each other:

It’s the first version of iRidium that has a block editor. There will be major improvements and more functions will be added in the coming releases. But even now you can add your own logical blocks made in javascript via a configuration file. All of it works free in the test mode (with a time limit) and you can try it yourself.